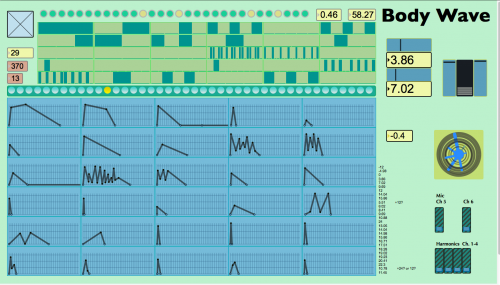 Music from the inside of the earth.

“Body waves travel through the interior of the Earth. They create raypaths refracted by the varying stiffness of the Earth’s interior. The density and modulus, in turn, vary according to temperature, composition, and phase. This effect is similar to the refraction of light waves.”

Body Wave is a new composition format for amplified trombone(‘s), objects, laptop, and multi-speaker array housing 4 to 12 channels. Body Wave utilizes a room’s resonating characteristics, physical attributes, sine tones, and amplified trombone(‘s) to create a variable dance of pulsing frequencies and sonic gesticulation. Body Wave is a performance piece of variable length and structure depending on the amount of performers, space, and audio channels. The internal structure is influenced by James Tenney’s “Spectral Cannon” where as each harmonic can be adjusted rhythmically overtime to a ratio. In this case, each harmonic can be manipulated rhythmically as a sub-division of a pulse. Body Waves can have a desired accelerando or decelerando calculated in cycles of pulses and subdivisions moving in proportion to the harmonic series rather than using a logarithm. (I’m trying to keep things simple because I’m not a mathematician). Instead of following a predictable form derived from math, Body Waves uses the harmonic and rhythmic structure in an open ended way to create original compositions.

The spectral content in Body Wave goes up to the 31st partial and can be further manipulated with other parameters, such as glissandi and changes in the fundamental frequency which calculates the pitch content during the course of the performance this brings the possibility of song structure. The live instrument(‘s) is used to interact with the pre-determined structure built from sine tones and envelopes. Pitch shifting is also employed to further the harmonic interaction from the live instrument as “artificial harmonics” or specific intervalic relationships can be created to accompany the harmonic content of the various moving parts. Each performance of Body Wave can be different, as it is ultimately a compositional format for one or more trombones, sine tones, and resonating spaces/objects rather than a set piece. Further more, the varying structure is dispersed though multiple audio channels which is then rotated through the sound field at varying rates and directions.

Body Wave is not a precise representation of a variation on James Tenney’s Spectral Cannon. It is more or less a place from which, as a composer, I can make qualitative and aesthetic choices not governed by an adherence to a strict mathematical form.

The resulting sound can imitate both the slow bloom of an ornate flower or the dramatic boom and swell of an active volcano. Generally it is the sound of the churning earth.

Here Is a Video of the Feb 7th performance. Please note the audio is 6 channels live and this digital version does not capture the full experience.

Music, Sound for Film and Media

Cycles on Cycles, Kat and Ben